I love November, I really do. From a writing point of view, there’s a lot of enthusiasm and creative energy floating around. I don’t know if that’s something that’s generated by NaNoWriMo, or if Chris Baty just tapped into it (possibly by accident) when he scheduled the event the second time around. (I suspect it’s the latter.)

Aside from the energy, I just like this time of year for the weather — fall is far and away my favorite season.

It’s one of those times of year when I really envy Neil Gaiman. Not for his writing (he has his, I have mine), or amazingly supportive group of friends (I also have that), or his dogs (got those), or daughters (got one of those too), or even his house (which is lovely, yes, but there’s too much snow in Wisconsin).

No, I envy him for this: 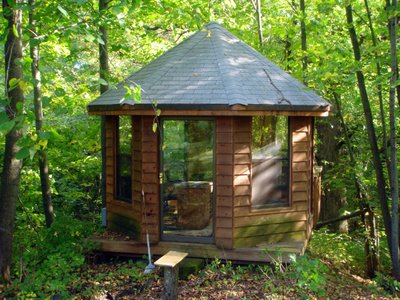 This is Neil’s Gazebo. It’s where he writes.

Nice, isn’t it? All the amenities, none of the distractions. It positively screams artistic and charming, and my god, I can’t even imagine what those trees look like right about now.

It makes me want to build a writing shed in my backyard. Seriously. I’m utterly fascinated by small, efficient living spaces, and have spent hours – even days – scanning sites like shedworking, drooling over videos like this one, and making sure that tumbleweed‘s monthly hit count stays up. Wouldn’t it be great to feed that obsession and get a whole new workspace out of it in the bargain? That’d mean my office inside the house would open up… We could use the extra bedroom…

Right. Where was I?

Ahh… right. I was daydreaming about a nice, personal, private, darling writing space.

I’m seeing that a lot right now. There are a lot of people out there who are supposed to be writing and are instead wasting their time trying to build Neil Gaiman’s gazebo. I see a couple of people doing it every day.

“Not me,” you think, smug in your superiority.

Let me give you a couple examples of what I’m talking about.

Bio: I’m a writer. I love writing and books. And writing books. This is my new twitter account devoted to writing.

Bio: I am currently writing my debut novel and looking for a [sic] agent.

That’s a gazebo designed to house the cart that you bought before you bothered getting a horse.

Bio: Switching from @oldusername account to this @myrealname account, so that all my writing is associated with ME.

I think I’ll call that one “painting the gazebo”.

I don’t mean to pick on anyone, but I think it’s really important to call this what it is: procrastination. (My granddad, puttering around in the back of my head, wants to call it “bullshit”.)

Don’t get me wrong: I understand why you’re doing this. It feels nice to create these cozy little writerly spaces. As an added bonus, these little side projects are finite and quickly achievable; it doesn’t take much time to set up a new twitter account (believe me, I know), and boom: when you’re done, you have this whole new space to play around in. You’ve accomplished something.

Writing? Writing is a sort of a never-ending battle; sometimes it’s nice to have a battle that’s a little more… endy.

Plus, once this little space is created, there’s more stuff you can do with it! Get the throw pillows just so, adjust the light through the window, get the wallpaper up, and maybe… down near the end of the day… maybe write someth — Oooh! Or you can post stuff to the new twitter account! Even better! A series of 140 character posts, each one with a definitive end, and lovely little ‘ding’ of completion! So much more satisfying than the ongoing slog of your Work In Progress.

People: I understand. I really do. Scientists have done a lot of studies on procrastination, and their conclusion isn’t that we’re lazy: it’s that we simply like things that we can have now. (Hat tip to ***Dave for reminding me of that post.)

Their conclusion is also that we’re better people who make better stuff if we can manage a little delayed gratification.

That means no quaint and adorable writer space and more writing in whatever space you’ve got handy.

It means more writing instead of building gazebos (whatever form those gazebos happen to take): less twitterbation, fewer blog posts about ‘the process’ and ‘how the writing went this morning/this afternoon/this evening/yesterday’, fewer posted excerpts, less time “getting in the mood”.[1]

Get back to it. The gazebo can wait.

1 – Anyone who knows me knows that I am guilty of all those things. If you feel I’m directing any of these comments out to the rest of the world with you in mind, remember one key thing: If it’s not about me, I’m probably not going to waste time talking about it. Sad, but true. XOXO

40 Replies to “You do not need Neil Gaiman’s gazebo”