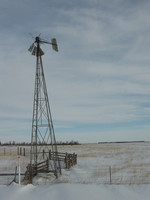 Three days after we got home from our trip to South Dakota, I heard my phone chime to announce an incoming text. It was about three in the morning, and while I have a few calendar reminders that routinely ping my phone, there’s absolutely no reason for that to happen at that time of night.

In short, if I was getting a text at that time, someone was sending me something personally, which means they were also up.

I pushed out of bed, pulled clothes on, and somehow found my phone. It was Mom.

On our way to town grandpa failing rapidly.

I shot a text at my sister, who bounced one back inside of two minutes. She was up.

I sat in front of my computer, looking at the phone. I knew I wouldn’t sleep, so I flipped on one of my MMOs and ran around in the game while I waited for word that my grandfather had died.

The text came at a quarter to five, then the call. His breathing had simply gotten more and more shallow and then, finally, stopped.
I don’t remember what I did after the call. I imagine I must have kept puttering around at that game until Kaylee woke up about an hour later.

((Just at this moment, it occurred to me that I haven’t logged back into that game since that morning.))

I got her ready for school, headed to work, and waited for someone to tell me when the funeral was going to be.

No, I don’t mean I simply sat there, but in my memory, the day is monochrome, punctuated by moments of Turneresque color during which I was talking to one family member or another.

Smaller memorial on Friday. Funeral on Saturday. Burial at his old church, so far out in the country it’s five miles of gravel road to get there.

I made flight arrangements, using up most of my Frontier miles from two years of flying to see Kate. Kate would be staying in Denver, since her mom was coming into town, and of course Kaylee wasn’t coming either.

I’m not sure about the rest of the week.

Friday, 5am, I’m at the airport. Boarded, fly to Omaha, rental car to Sioux Falls, then a drive to the farm with Bonnie and Reggie and the kids, the backseat filled with the sounds of Spiderman 3 on DVD. I rode shotgun, reading Little Brother and sharing the best parts with my sister as she drove.

We stop at the farm, wash off the road dust, eat some supper, and get ready to go. I’m one of the few in a tie for the Friday evening memorial.

His hands are so cold.

They polished his wedding ring.

The flower arrangements behind the casket are roses, wheat stalks, and the tail feathers from ringneck pheasants. Perfect, really.

The ceremony started. Pastor speaks and asks anyone else who wants to do so.

My aunt gets up and talks about grandpa as a teacher.

My sister gets up and reads a poem, then pulls out a wicker basket filled with all the different types of candy he used to ‘hide’ in his candy drawer in the house, just at the right height for the grandkids. She passes it through the crowd.

She hands me the mic as she sits down, knowing I’ll say something. I always do, don’t I?

I try. I try my absolute damndest. It takes me six tries to get through the first sentence; to explain who I am and why I’m talking. Trying to talk, anyway. Dad isn’t looking at me, and it’s because I’m having as hard a time as he would have, which is why he had the good sense to stay sat down.

I talk about how he lived, filling up every day with stories. Laughing. Really living. That laugh of his, that chuckle. I think I repeated myself a lot.

I try to explain what he was to us, a grandfather only his 40s when I was born — another parent, another kid to play with. A friend.

There’s some kind of snack service afterward. We stand in small circles and tell funny stories about my grandpa and any number of hunting adventures, mis- and otherwise.

When we get home, we pull out a huge set of dominoes and play Turkey Feet until we’re gasping for air between laughs. It helps.

Saturday morning, we have to be in town at 9:30. This is the general service. It’s more impersonal, I suppose. The casket is closed. The Masons do their thing after the pastor speaks, then we all exit outside.

He’s brought to the door of the church, and the pallbearers will carry him to the hearse. That’s us; the grandkids.

There are nine of us there, out of ten. We are grown now, with kids of our own, and we carry our grandfather, who taught us checkers and gave us rare coins on our birthdays, out of this life. The casket is heavy. We move through the crowd in a private bubble filled only with the sounds of shuffling feet a very quiet sobs. As a group, we pass a very dark milestone in our lives.

We drive to the cemetery on old county roads. The gravel, the barbed wire fences along the road, the summer-going-to-fall grass on rolling hills; all of it is home in a way that no other place will ever be.

We set the casket above the hole.

The honor guard comes to arms, turns to the treeline and fires their salute.

Gun smoke in an autumn grassland.

That was my granddad.

3 Replies to “The last part”