Me: We need to take breaks, guys! Work-life balance is a thing. Go for a walk! Unplug! Stop working through lunch and weekends! 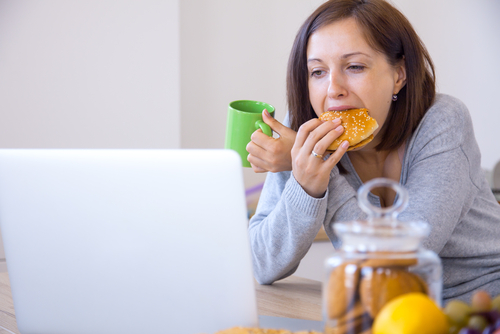 [This is a repost of a post I wrote about two years, which has inexplicably disappeared from the site.]

I need to talk about something pretty shitty, but it requires a little background information, first.

Many of you probably already know this background info, but some of you don’t, so I’m filling it in for them; everyone else, please bear with.

I doubt it will surprise anyone to know I’m a long time Star Wars fan boy.

Am I the biggest Star Wars fan boy who’s ever lived? No, most certainly not.

In fact (and this bit will shock the less-super-nerdy out there), there are groups of folks out in the world who, after examining the extent of my exposure to Star Wars “stuff”, would decide quite seriously that I’m not a real Star Wars fan at all, or at least not a serious one.

The funny thing is, it’s hard to even explain this without getting at least somewhat nerdy, but I’m going to try. (In my head, as I write this, I’m talking to my sister, which is how I approach more posts than anyone would imagine.)

Now, a lot of people – most people – who say they like Star Wars mean they like the movies, because that is literally the only Star Wars thing they know about. I’m going to call these folks “mainstream fans.”

Obviously (because as a species, we really can’t leave this kind of shit alone) there is a lot more Star Wars stuff out there – more stuff than you’d readily believe. Games, of course. Comics – fucking walls of comics – and enough novels to fill a library.

Collectively, all the stuff that isn’t the movies has been (until recently) referred to as the Star Wars “Extended Universe” or “EU”. The quality of the stuff varies, and by “varies” I mean some of it is pretty good, and some of it is pants-on-head fucking idiocy that makes Jar Jar Binks look as cool as Chewbacca, by comparison.

How does stuff like that get the official stamp of approval? Pretty simple: George Lucas really likes making money, and people are willing to pay him a whole shit ton of money to play in his backyard, so he lets them write novels with Force-nullifying space-sloths (yes, seriously) and puts the Official Rubber Stamp on it, because (a) he got money and (b) he knew if he ever came out with a movie that contradicted stuff people had written, his version would invalidate all the drek he’d authorized in the past, so who cares?

In general, I don’t follow the EU stuff, and (with the exception of the first Star Wars roleplaying game that anyone licensed) don’t know much about it.

The quick summary: there is miles and miles of EU stuff, set anywhere from 30 thousand years before to several hundred years after the movies ‘mainstream fans’ know; the whole thing is an virtually unchartable hot mess…

And there are fans out there who know every single inch of it. Or most of it. Certainly more of it than I do. I’ll call them super-fans.

Now: I have no beef with those super-fans. None.

A few years ago, Disney acquired the rights to the Star Wars intellectual property and announced they were going to start doing stuff with it, and that George Lucas wouldn’t have very much if anything to do with it. (Which, after the prequels, was kind of a relief to hear.)

And Disney took a long look at the Extended Universe stuff and, after some thought, said “Yeah that’s… nice and all… but… yeah. None of that shit is official anymore.”

Basically, they boiled down “Official Star Wars” to the movies, the Clone Wars animated series that ran a few years ago, and whatever stuff they make from here on out (like the totally amazing and fun Star Wars Rebels show, a couple new novels, and of course the new movies coming out).

All that EU stuff? It’s not the “Extended Universe” anymore; it’s “Star Wars Legends” which, honestly, I think is a great name – it implies these are stories about the Star Wars universe (which they are, of course) but just that: stories. Unverifiable. Unverified. Unofficial. Enjoy them if you want – please, by all means – but know them for what they are.

Most – and I do mean most – super-fans were fine with this: they get to keep the stuff they’re into, and they get the biggest pop-culture engine in the world cranking out new Star Wars stuff until the heat-death of the universe finally invalidates Disney’s copyrights.

Some of the super-fans are not happy, and have decided to be unapologetically shitty human beings about the whole thing. I will call this small, vocal-like-a-screaming-howler-monkey subset of super-fans the “spoiler fans,” and here’s why:

These people have decided that it’s not enough that they have this stuff they like. Because Disney has said it’s not official stuff anymore, that somehow makes it impossible to love that stuff as much as they once did – their love is somehow capped by its lack of an official stamp, and this cannot be allowed to stand.

What do they want? This is pretty funny, actually: they don’t just want Disney to go back and say “okay, that stuff is still at least as official as it was when George Lucas was taking your money and planning on invalidating anything he felt like, whenever he felt like it” – they (apparently) want Disney to keep making EU stuff, in addition to the stuff Disney is already making.

And yeah, it’s kind of funny, until you realize the internet has allowed shitty people to be shitty on a far greater scale.

See, they’re trying to hold Star Wars hostage to get Disney to do what they want.

How? They have vowed that they will spoil each and every spoil-able moment in the new movie as loudly and as broadly as possible (which, today, is pretty loud and pretty broad), if Disney doesn’t cave.

You’ve probably seen those image memes on Facebook or whatever, asking people not to spoil the movie. I have, and thought “yeah, it would suck to be spoiled ahead of time.”

Because that can happen by accident. Well-meaning, happy, enthusiastic fans can get on the internet and broadcast out to their friends, joyfully exclaiming about all the stuff they loved about the movie, and accidentally spoil something for someone who hasn’t seen it yet, because how have you not seen it yet?!?

This isn’t that. This is not an accidental thing. This is not your friend loving the movie so much he spills something.

This is a guy standing outside the movie theater before The Empire Strikes Back, waiting for the line to form, and then telling every single person in line “Darth Vader is Luke’s dad.”

Except the guy has a megaphone the whole world can hear, if they aren’t careful, and he shouts the message at unexpected times.

I’m telling you about this, because it already happened to me, and I don’t want it to happen to you.

I leaned about this little movement of spoiler-fans via a friend’s post on Google+.

The very first comment to that post was one of these guys, and all he posted was a spoiler, and I am pretty sure he spoiled probably the biggest plot twist in the movie for me.

Now, obviously, I haven’t seen the movie yet, so how do I know?

Let me put it this way: if that guy who came up to you in line at Empire Strikes Back had said, perfectly straight-faced “Darth Vader is Luke’s dad,” would you have believed him?

Maybe you don’t believe it, completely and totally, but you believe it enough that you will sit down in the theater and, basically, spend the whole movie waiting for that moment to come. Or not.

Even if it doesn’t, you will not have enjoyed the movie as much as you might have, because you were distracted. And if it does happen just as that guy said? Well.

That’s the kind of thing this guy posted. One line. Ten words, and there goes my 100% unmitigated enjoyment of the new movie.

Now, shut up: this isn’t about me. Yes, you’re very sorry about this happening. Yes. I love you. Thank you, now shut up for a sec.

These fuckers are out there. They are doing this on purpose. They’re enjoyment of their pile of stuff has been somehow – idiotically – damaged; Disney made their Masters-level knowledge of a made-up universe less important than it already was, so they have decided to shit on every other person who wants to enjoy the new movie, because (apparently) “Fuck anyone who is enjoying themselves, if I am not.”

I don’t care about me. I’ve watched Empire Strikes Back probably thirty times, if not more, and I know – know I will enjoy it when I watch it again, because I’ll be watching it with my kids, and the shine hasn’t come off for them.

Because of that, I know I will enjoy this new movie when I watch it, because I will be watching it with my kids and even if I don’t feel the same sense of surprise and wonder as I might have, they will, and I will still get to feel that, through them.

And I know they will get to feel that, because I’m going to protect them from these… infantile man-children and their shit-spattering temper-tantrum.

Now: why did I write all this? Because I want to try to protect you, too.

When you see spoiler warnings, heed them. Stop thinking of spoilers as “that one little thing my super-happy friend let out after he saw the movie” and start thinking “halitosis-reeking stranger who wants to dip his filthy index finger in my morning coffee.”

From here until you see the movies, absolutely avoid comment sections on any Star Wars-related post on any kind of social media.

Just… for a few days, expect people you don’t know to be kind of shitty for no good reason.

I realize that’s kind of a downer message, but seriously: I want you to enjoy the movie.

And also, yeah: I want those petty fuckers to lose, because fuck them.

(Comments on this post are disabled, for obvious reasons.)

But the drywall is in and the rough inspection is scheduled.