Last night, for no particular reason, I moved from ‘folding laundry and putting things away’ to ‘cleaning out the closets’ mode, and ended up putting four bags of (clean, entirely serviceable) clothes out by the front door to be donated to charity. We’ll probably drop them off tomorrow, since we’re also dropping off some old computers for specialized recycling, and donating the chairs from an dining room set that we replaced during the wedding (the old table is going to meet a circular saw and become a couple of bookshelves in the kitchen area). In addition, we’re replacing our suddenly-non-functional dishwasher this weekend, and need to figure out a way to get the old washing machine and a (regrettably) broken elliptical machine out of the basement. It’s a spring cleaning extravaganza, and has me eyeing the rest of the house with a hungry, contemplative expression.

Time to get rid of a little clutter…
Now, to be fair, neither I (nor Kate) are generally predisposed to clutter in the first place, so it’s not as though the house is that bad. Large stacks of papers don’t last very long. Counter tops stay relatively clear. Rooms themselves aren’t usually burdened with too much furniture: I’ve lived here for over half a decade and the front living room has gone entirely unfurnished for that entire time – until it came into service as a play room for my daughter. The wide, empty space suited me just fine — it was one less thing that needed straightening or organizing when people came over.
I like open space in a house, and Kate’s lived in New York apartments most of her adult life, where a walk-in closet is worth more than a bedroom the size of a walk-in closet — I think she’s still getting used to the idea that our living space has square feet measurements with four digits. (You should see her in the local supermarket; it’s like Robin Williams in Moscow on the Hudson.) 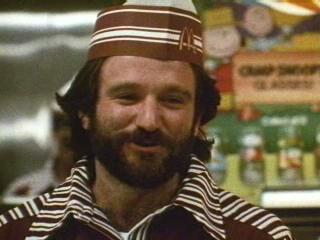 Not Kate.
And yet… what few knick knack shelves I have brim to overflowing with current and not-so photos of friends and family, and I definitely have problems with keeping things that I will never, ever, EVER use or interact with again in my life, but which carry some nearly-forgotten sentimental importance; while the open space in my house is pretty clear, closets and drawers often brim to overflowing.
Every so often, I give such things a stern look and start tossing.
That’s how the closet clearing came about. By rights, I shouldn’t have any more old clothes left to throw out — I’ve dropped 60 pounds in the last five years and kept it off, and have long since donated any and all clothing that old-me needed around; well over a dozen trash bags of L, XL, XXL, and even some XXXL stuff over the last half-decade — what I’m taking to Goodwill tomorrow are bags of t-shirts with logos I no longer find funny, shirts I still like but will never wear because they’re four sizes too big, gifts that I never wore and never will, and even a couple old suits and sports jackets that I kept around ‘just in case’, even though they make me look like a dressed up scarecrow in a fat man’s field. It was all just junk I didn’t really need but didn’t have the guts to throw out at the time.
Weeks like this are freeing and a bit traumatic at the same time. I really, truly, LOVE clearing junk out of the house — I love the feeling that there’s more air to breathe, thanks to the open space created — at the same time, everything we own has a memory and emotion attached to it; we like the person who gave us that shirt, even though we’ll never wear a doubleknit maroon macramé tank top. If I could look at a pile of stuff and know which things I’ll need and which I’ll never use again, things would be simple, but it almost never is.
It helps (tremendously) not to think about the STUFF itself, and focus on what you want to accomplish, but it’s still hard.
Hopefully, the pay off (a clean, shiny, junk-free -reduced living space next week) will be worth it.
Edit to add: Kate wanted me to mention a book that came in for me via Amazon this morning: It’s All Too Much, by TLC Clean Sweep guru Peter Walsh. Its arrival is a nice bit of synchronicity, but I didn’t mention it in the post because (a) I’ve only read the marginally schmaltzy introduction and (b) the book was actually purchased as research for a “working smarter” training project I’m developing at the new job.