Trumpgrets (tagline: "suck it up, buttercups") is a tumblr collecting tweets from Trump voters who've started processing the fact their candidate is already breaking his campaign promises.

I have to confess there's more than a little schadenfreude involved in scrolling through the entries. That's mixed, equal parts, with anger at people whose votes have pulled the country down a dark four-year path (complaining Trump isn't being shitty and vindictive enough), and real sympathy for people who are in a place so bad they were willing to bet on anyone who seemed likely to change things; there is, simply put, wrong in America, right now, and we should have seen that and seen TO that without having a cheeto-colored racist dropped in the oval office as a wake-up call. 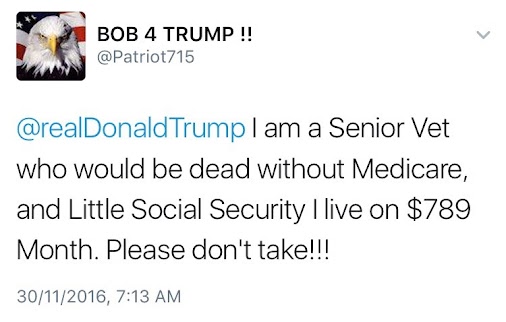 Trumpgrets.
suck it up, buttercups

One Reply to “The Fact They’re Surprised Says So Much”