A few days ago, I wrote about the overuse of the -punk additive in the world of publishing. The cyberpunk label lead (tongue in cheek, initially) to steam-punks/steampunk, which started some kind of not-so-tongue-in-cheek avalanche of “Punk means cool! If our thing is cool, we should add -punk to it to denote our coolness!”

It was (and still is) my opinion that that overuse “dilutes the brand“, which is a shame.

Unexpectedly, the post hit some kind of vein or nerve or alarm gong for people. Some responded with “Yes! THIS!” Some rolled their eyes and muttered “Overthinking it, dude.” Fair enough; that happens.

But the most interesting response was related specifically to steampunk, where several readers and writers of same stepped up and said “Hey! You don’t think there’s rebellion against the status-quo in Steampunk? You’re ignoring all the awesome stories about women rising up out of dismissed second-class status and making a name for themselves.”

And, again, that’s fair; I didn’t ignore those stories, exactly, but they didn’t ping my radar when I wrote my little screed, because I don’t see them as the same thing as “punk rebellion”. I twooted:

Why would I have to be stupid to try such a detangling? Frankly, because I know next to nothing about gender issues in any kind of lit. I’m not really qualified.

But that’s never stopped me before! All I need is a little encouragement.

So, stepping very carefully, I started noodling this over. I felt, and still feel, that punk-the-way-I-defined-it isn’t a very strong presence in steampunk novels. That said, I could see people’s point that there were many, as one reader put it “uppity wummanz unite!” stories in there. Not always: it’s obviously not enough to just have a female protagonist — Boneshaker isn’t about “little person against the Institution”; it’s a classic “hero journeys into Hades to retrieve a loved one” — but it shows up fairly often.

So that’s a curious thing. “Punk nobody against the Establishment” is a big part of cyberpunk, but not-so-much in steampunk, where “Smart Woman rises out of Gender Oppression” is common, instead.

And really, that’s obvious: both are frontloaded into their respective settings. Cyberpunk is a subset of science fiction for a reason: it’s usually near-future — a predictable near-future — in which corporations have become even more monolithic untouchable things than they already are. “Little guy uses tech to rise up” is obvious: tech is one of the arenas in which envision some level of equality, thanks to the early hackers that writers like Gibson heard and read about. Gender issues in a future-us setting aren’t nearly as easy to find, and in my experience they don’t find as much traction with readers (in that kind of story) — we’d like to imagine ourselves having evolved past that, at least, even if we’re stuck in some dystopian future, ground down under a corpocracy.

Which isn’t to say gender inequality issues aren’t relevant and important and a thing worth thinking and talking about: they are. Enter steampunk which, due to its sort of hazy, hand-wavey “era”, pretty much gives us gender bias as an issue by default. It’s a good match.

So, finally, that Venn diagram, rendered with my undeniable Paint skills: 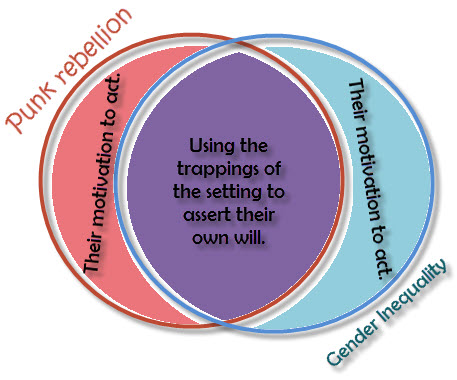 So, in this somewhat obvious breakdown, the difference between the two kinds of stories lie in the character’s motivation, and the big overlap is in the resulting action: rebellion. Simplistic? Sure. Maybe even way off base, but that’s the spot I got to in my couple-three days of thinking about it.

And maybe that opens up the discussion of all ‘-punk’ stories, a little bit. If you solve for the common denominator in all this, you get “Someone representing a significant portion of the population (and someone we can identify with) uses the [tech] of the setting to upset the apple cart in some way. Flavor as appropriate to sub-genre, bake, and serve.”

I can accept that. That’s a reasonable way to (re)define the “-punk” umbrella.

That still doesn’t mean the term isn’t wildly overused, and often laughably inaccurate (see my The City & The City example from the last post). That is still a problem, and it’s really what I was ranting about in the first place.

But if you hand me a book and say “this is steampunk” or “this is dieselpunk”, I’m not going to dismiss it out of hand; I’m going to look (full of hope) for a certain kind of story.

Because it’s really awesome when it’s there.