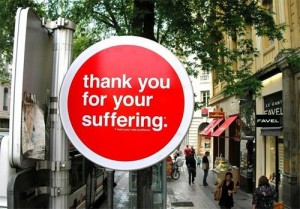 So we’re about a week out. Next Monday night, they take down the tents and roll the circus off to the next town.

Now, if you’re very very lucky, and your word count is roughly on track, you’re maybe starting to see where the end is. There’s about ten big scenes between here and there, and you’re home free, running under the sun.

Keep writing. Keep doing it and doing it. Even in the moments when it’s so hurtful to think about writing. – Heather Armstrong

Could be you just finished up a nice, big, fat weekend where you expected to get about five thousand words both days and really get ahead. Or get caught up. Or something. That was what you expected.

You didn’t expect it to hurt, that’s for goddamn sure. You didn’t expect it to feel like pulling your eyeteeth with a pair of needlenose vise grips just to get 400 words out. You didn’t expect to barely get through your daily word count, and nevermind that crazy talk about getting ahead a little bit — let’s just forget that idea was ever out on the table. It’s disheartening, is what it is; umpteen thousand more words? After we’ve done so many? That’s just —

I’m putting these posts out here for everyone, and I feel – genuinely feel – as though they’re doing some good. I really hope that they are – it’s why I keep doing them when (and here’s a big reveal) I had absolutely no intention of doing them in the first place. Shit just happens sometimes, you know? Sometimes it’s good that it does.

But I also feel as though some folks think that, since I’ve done this a bunch in the past, this shit is easy for me, so let me be clear:

This is not easy for me. I am right there with you, just barely ahead of my word count, unable to really get ahead a little bit and coast.

Sure, every so often, I get an absolutely burning desire to write. To write right now. I am filled with author-energy and goddamn but I just have to get my fingers on a keyboard immediately.

Those magical moments almost exclusively happen about four minutes into a two-hour meeting that I have exactly zero chance of skipping.

Most of the time? 99% of the time, when it’s time to write, I’m reluctant to sit down. I’m sluggish about actually starting.

I have a theory that the closer you get to the Thing You Should Really Be Doing With Yourself, the more you procrastinate and drag your feet, because your mind (filthy, lazy traitor) knows how busy it’s going to be when that Thing begins, and it’s trying to prevent it from happening.

So instead of those fiery bolts of inspiration sweeping us away, there’s a routine. There’s the obligation and the commitment and the habit and the necessity of avoiding the shame of failure. That gets me sat down and writing.

It is not easy. We do it anyway.

Work every day. No matter what has happened the day or night before, get up and bite on the nail. – Ernest Hemingway

So we had a non-stellar weekend, productivity-speaking. That was yesterday. Fuck yesterday.

Or maybe you made the mistake of re-reading stuff from earlier this month, and now you can’t bear the thought of doing anything but going back and fixing the broken bits you saw. It’ll only take a few minutes. An hour, tops.

It will take the rest of the month, if you let it; the rest of your life. This is not statue-polishing time; it isn’t even statue-carving time. It’s cut-the-stone-from-the-mountain time, and that sucker is almost out. Don’t start —

You know what? This reminds me of a story.

Story Time
I love my grandmother. I love her to tiny little grandmother pieces, and not because she’s the only grandma I’ve got left — it’s because she’s always been the ‘cool’ grandma. (I’m her oldest grandkid, and that actually holds some traction with her as well, which I don’t mind.) She is unfailing in her love and support and her rickety laugh and her quirky smile.

She just… does this one little thing I hate.

See, Grandma Floy has been around a couple of times when I’ve moved. Two, if I remember correctly, and she has always been a tremendous help, even if it’s just with a few suggestions here and there and making sure we all have some lemonade and sandwiches when it’s time for a break.

But there’s this other thing she does during the move.

She dusts the furniture.

Not… you know… not when it arrives in the new place.

Not when it gets unpacked.

Not before we pack it.

She dusts that shit while we’re moving it.

No, not while it’s on the truck.

So forget that rock-carving analogy. That’s trite and overdone. Try this:

Nothing you write, if you hope to be any good, will ever come out as you first hoped. — Lillian Hellman

Get back to work.

The only reason for being a writer is that you can’t help it. — Leo Rosten

2 Replies to “#NaNoWriMo: I feel like you need a pep talk.”