“Everything a writer learns about the art or craft of fiction takes just a little away from his need or desire to write at all. In the end he knows all of the tricks and has nothing to say.” — Raymond Chandler

I don’t give much in the way of actual writing advice, for two reasons.

Also: I give bad advice, and you shouldn’t listen to me. (So that’s three reasons.)

Also also: I’m not sure it makes things that much better. Okay, yes: I avoid adverbs and prepositional phrases absolutely as much as I can, within reason. (You see what I did there?) I try to use punctuation correctly and I check my Strunk and White when I’m not sure. That’s just mechanics, though; proper tool use.

But any discussion on style and theme and premise and that sorta stuff? Masturbatory, is what that is. (IMO, YMMV, Offer Void, et cetera.)

‘Style’ is ‘how you write’, which (a) you already have and (b) is changing throughout your life anyway so don’t worry about it. It’s like thinking really hard about your socks every time you take a step.

Theme and premise? Hell if I know.

Theme and premise are the kinds of things that make people ask “What were you trying to say when you first introduced the duplicitous character, standing in front of a building with a facade?” (At which point I’m thinking: “I dunno… it’s a shitty little street. Shitty buildings on shitty streets have facades.”)

Thinking about theme and premise while you’re in the middle of your first draft (to bleed out my analogy even further) is like looking through a telescope to see where you’re going on your walk: you fall down a lot and you don’t see a goddamn thing where you actually are.

Anyway: that kind of stuff will come out unconsciously in little hints and ghosts as you go through the first draft. Revisions and 2nd (and 3rd, and 4th) drafts find those little ghosts and hints and strengthen them into recurring themes and (if you’re inclined toward it) A Message. They are not things you should dwell on during initial writing.

Now, all that stuff up above could possibly be mistaken for Writing Advice, but it isn’t. I’m not telling you about something you should do, I’m telling about shit you shouldn’t do. Should not, in fact, even think about.

Why do I even mention it, then?

Because today is Day Five, and sometime either today or tomorrow you’re going kind of get your bearings on the story — to get a sense of what’s actually happening. Your characters will stop flailing around quite so much and actually Set Out To Do Something.

And you might catch the barest hint of something that looks like a Theme. (Or a Premise, maybe; fuck if I can tell em apart.)

And in seeing that strange beast for the first time this month, you might feel compelled to pursue it.

Do not. Just keep piling on the words. Keep telling the story.

Let’s go back to the righteous Reverend Chandler.

“Throw up into your typewriter every morning.” – Raymond Chandler

Babble on, guys. Build the teetering, leaning, unstable tower. When you hit that point (and you will) where you realize that – maybe – you know what shape the thing should be when it’s done, don’t freak out. Don’t let on; don’t give it away.

We can stabilize the damn thing later. 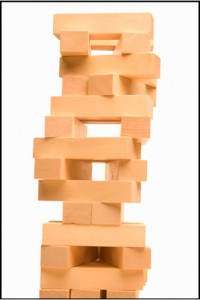 6 Replies to “#NaNoWriMo: Babble On”