I’m going to tell you about a life.

I didn’t know about him at the time. I wasn’t even thinking about puppies. I had no plans to get a puppy.

That’s just as well as, due to a few complications, this particular puppy – who luckily came into the care of the no-kill Denver Puppy Rescue – wasn’t eligible for adoption at the normal age. It was several months before he could meet any potential owners.

And, sad to say (though lucky for me), many of those potential owners weren’t interested in a puppy who, at five months old, already weighed in at over fifty pounds. “Black Lab/Great Dane(?) Mix” read the tag on the outside of the kennel. It wasn’t a label that promised a unobtrusive pet.

That was his name. Jake. I knew it as soon as I saw him: literally looked through the kennel door, turned around and said “This is Jake. He’s coming home with me today.”

Now, I’ve been around dogs since before I could walk — my family has always had a dog, through never two — but for all that, I’ve never really had a dog of my own. They’ve always been Dad’s dog or the family’s dog or just general ‘belongs to the farm’ dogs. I’m definitely a dog guy, but I’d never had my own.

So, almost thirty, I got my first puppy.

My townhouse hadn’t seemed small until he moved in, nor had the lack of a fenced yard bothered me, but that all changed. By the time Jake hit his first birthday, the papers were signed and I was moving into the house I still call home today. Corner lot. Huge backyard. Great dog-friendly neighborhood.

In a way – a very obvious way – I got the house for him… or at least because of him. Which I consider a good thing. It was worth it. I love the house, too. 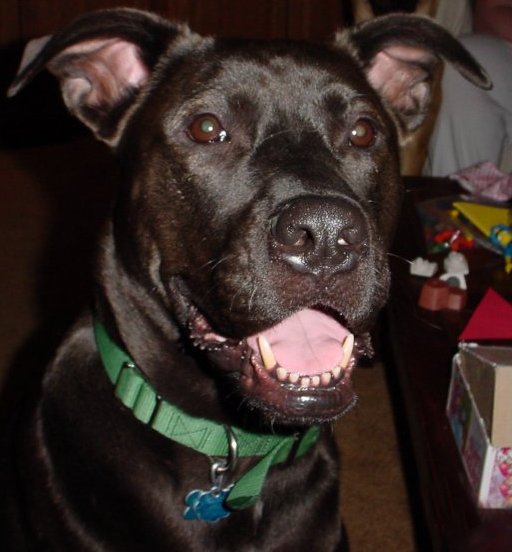 People like to talk about dog years. “He’s 70 in dog years,” they say, as though our pets have somehow learned to compress time. They haven’t. The fact of the matter is this:

A year is a year. It has a set number of days, an immutable number of hours, you only get so many of them before your friend is gone, and you will never, not ever, manage to make it feel as though that limited time was enough — that you didn’t somehow waste it.

More love, per minute, than a living creature should be able to manage, and maybe the big dogs even more than that.

I realized early on with Jake that my exposure to herding and hunting dogs throughout my childhood had instilled a bone-deep belief that “good dogs” meant “well-trained dogs.” I still believe that, probably even more so, and back when Jake was a puppy, we dove into training head first. Big puppies need good training so they still mind when they’re full grown. Some dogs are stubborn, or simply don’t take to training well.

Jake was not one of those dogs. Our trainer, who didn’t particularly like Jake’s “look” (she had something like seven German Shepherds at the time), ran out of things to teach him about two-thirds of the way through our sessions, and had to resort to teaching him ‘tricks’ (she said, distastefully) like shaking hands, fancy begging, and more complex movement commands. The basic list (sit, stay, outside, kennel, quiet, up) doubled, then tripled, then he started guessing what we wanted before we’d finished demonstrating it. It was easy, for him and me. It was fun.

“He’s…” the trainer shook her head at our last session, then turned to him. “You’re going to be a pretty good dog, Jake.”

And he was. Ninety pounds of eternal puppy, once he’d finished growing. Big for a lab, maybe small for whatever else he was. Perfectly Jake-sized. On his back feet, he could rest his paws on my chest (only when given permission) and ‘kiss’ me with a tongue roughly the size of a damp bath sheet. 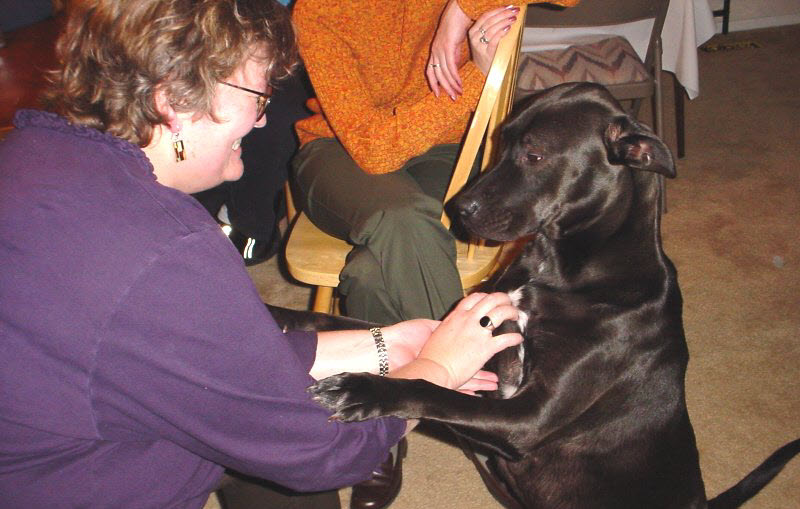 Somewhere along the line, we started calling him Jakemus Maximus, as though he were a Roman general.

We got dog food in bags that weighed half as much as he did, used a water bowl the size of a small dutch oven, and bought rawhides in bulk from CostCo to keep him from eating the dining room table.

Funny story about that table. I tied him to the leg one time, at Halloween, so he wouldn’t rush in and lick the faces of trick or treaters all night.

First time the door opened, he rushed anyway and snapped the leg of the table (oak, about six months old) clean off. Like it wasn’t even there. He loved meeting new people.

In 2002, we got him a puppy of his own, because he had more energy than a household of people could bleed off. 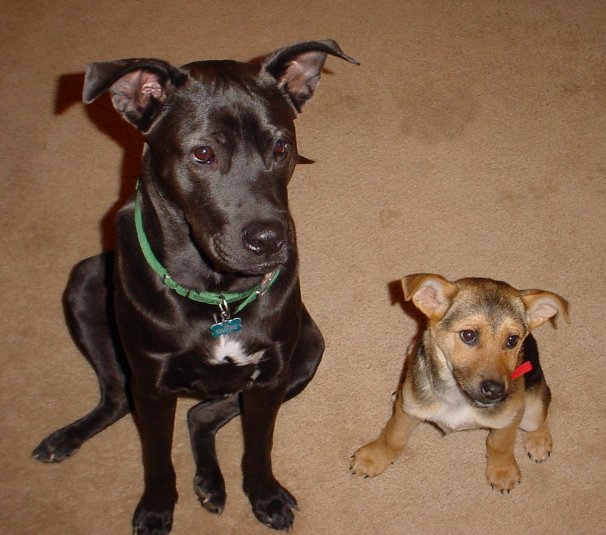 Dizzy didn’t train as fast as Jake, but to be fair she never needed to — I’d give a command, and she’d simply look at Jake and copy him. When he ran, she ran. When he went to his kennel, she went to hers. When he barked at strangers, she followed suit.

“Sorry about that,” I murmured to the local sherrif’s deputy, who’d dropped by to explain some flashing lights down the street. Jake didn’t like his sunglasses. (Never liked smokers either. Good boy.)

And our family. Our friend’s baby girl would waddle up to Jake, grab his ears, and use them to pull herself onto his back.

Jake just sighed and grinned. “Kids,” you could hear him say. “But what can you do?” 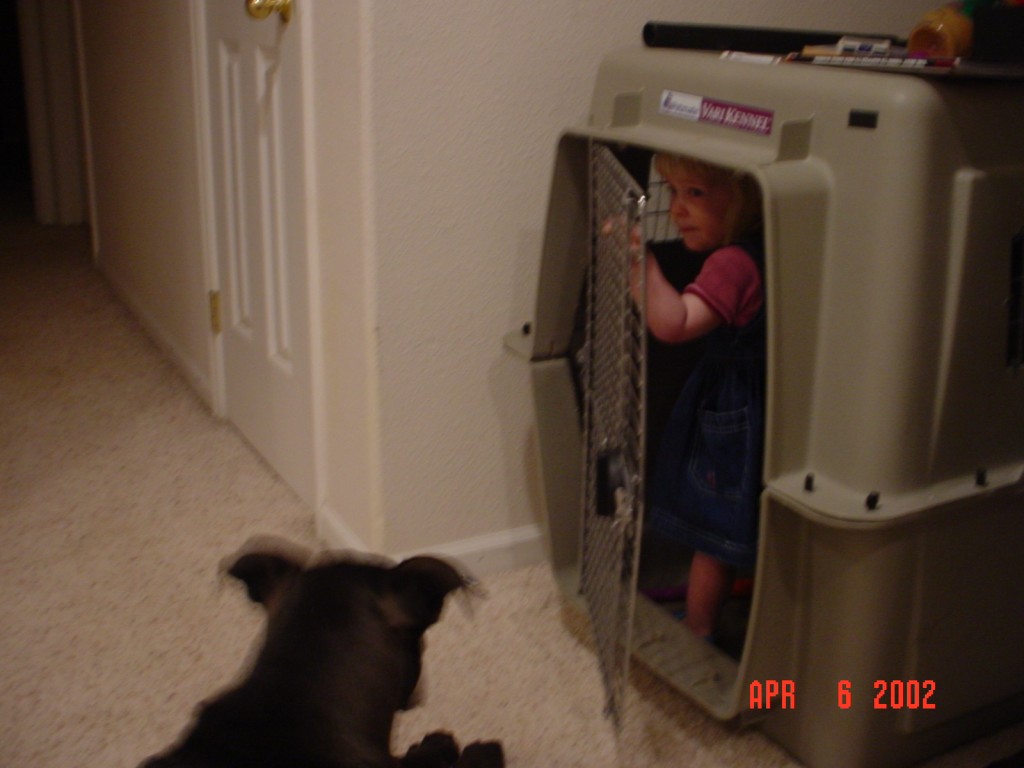 You might mistake him for harmless. I did, sometimes.

Once, my nephew (who lived with us, about 11 years old at the time) ran out to the garage to get something from my car. He left the door open.

A dog, walking by the house, went a bit crazy: barking at the boy, pulling at its leash.

I didn’t even see Jake move. I blinked, and he and the other dog were rolling to a stop in the middle of the street, Jake on top.

People, that was one thing. People were, in Jake’s mind, pretty much my responsibility.

But dogs? Dogs didn’t get to threaten his family. Ever.

I’ve never been very good about taking pictures. There are bunch from 2002 (when we got Dizzy), a few from 2003, and then a big gap until 2007, right around his birthday. Kaylee’s two years old. Jake’s seven. No snow on the muzzle, yet, though he tires out on our walks a little sooner than he used to. He keeps hurting his back leg when he tears after rabbits in the back yard and hurls himself off the deck at full tilt. 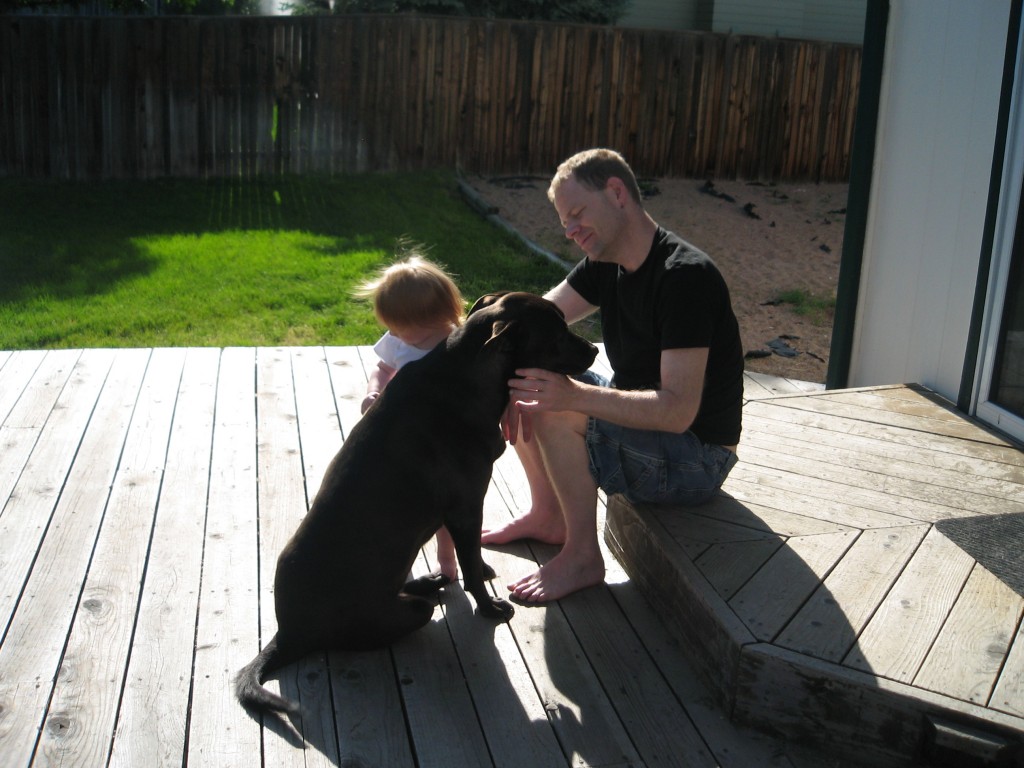 He’s not sleeping on the bed anymore. Little bit too much work to get up there.

I’ve stopped buying rawhides in bulk – his manic chewing days are past.

He’s still a puppy, though, at heart. In his heart. With his heart. 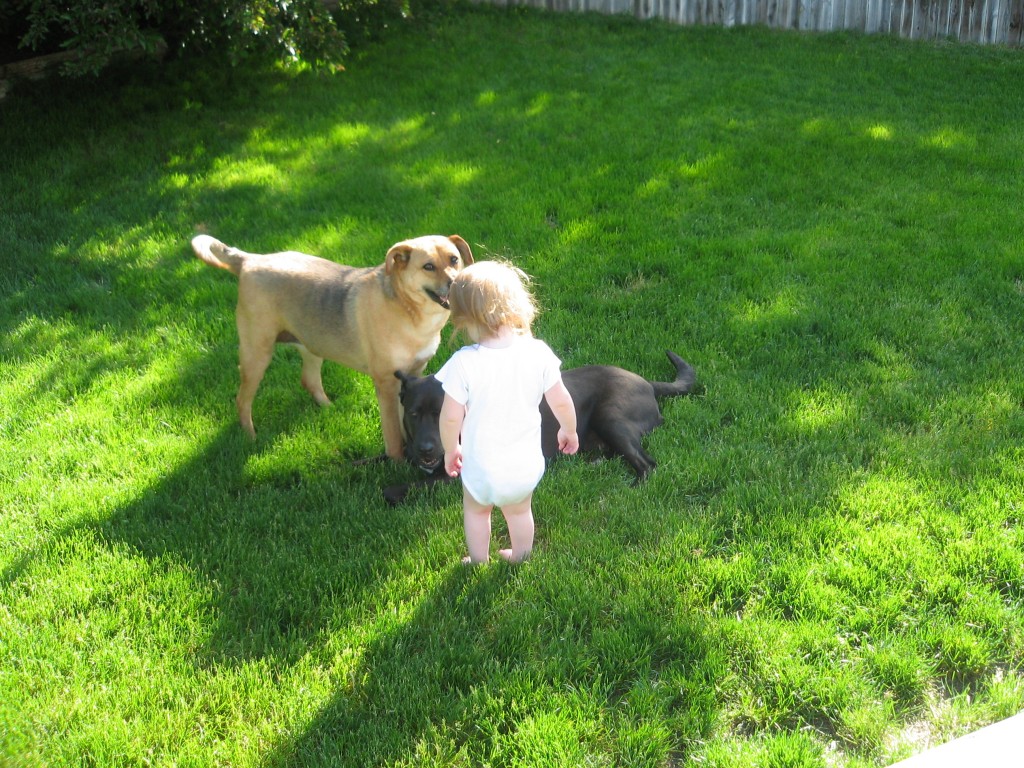 Kaylee grips him by the (so soft, so thick) ruff around his neck, and pulls herself onto his back where he lays like a sphinx in the middle of the yard.

He sighs, and grins. She hugs his neck.

What can you do? 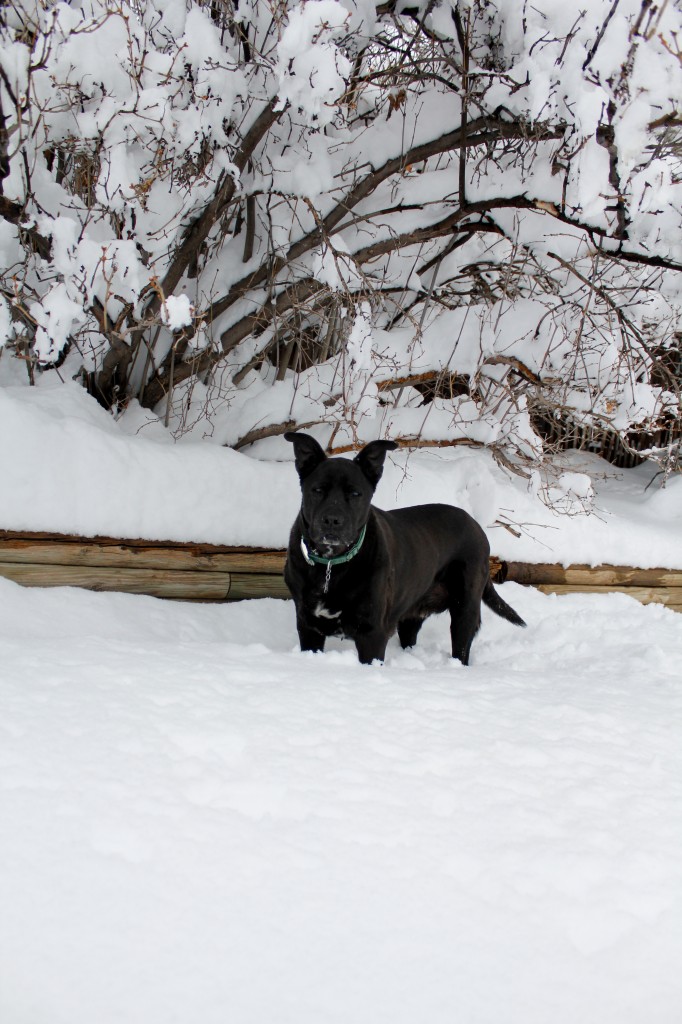 Winter in Denver is cold at night, even when there isn’t much snow. Jake’s never been a huge fan of the snow, but by 2010, he struggles to find a place to sleep in the house at night. He’s moved away from my side of the bed, where he’s slept for years, and tucks in on the far side, away from the patio door and the cold.

He’s taking pain medication and anti-inflammatory pills now, but I don’t always remember to give them to him in the summer — most of the time he gets around fine, he just doesn’t like long walks as much.

I don’t know when the every-few-days pain meds and other pills became an every meal, every day, every season, and sometimes-extras-at-noon thing. It seems like a long time ago. By 2012, it seems like it’s always been that way.

But he can get around, still, all by himself. Up and down the stairs to the basement, where our office is. That’s pretty good for an old puppy.

The slick floors start to mess with his ability to get around. We lay out runners along all his frequent paths.

He starts to have trouble with the full flight of stairs. He gets down okay, but I have to carry him up.

Vet visits become… well, we know everyone there on sight. They know Jake at a glance, from the sidewalk outside.

“I’ll be honest,” our amazing vet says. “I’ve suggested about everything there is to suggest.” She looks at me. “If I can be honest, you guys have done everything that can be done, and more — you’ve gone further to make Jake’s life good than any family I’ve worked with.”

I look at Jake. He gives me a big, bathsheet kiss. 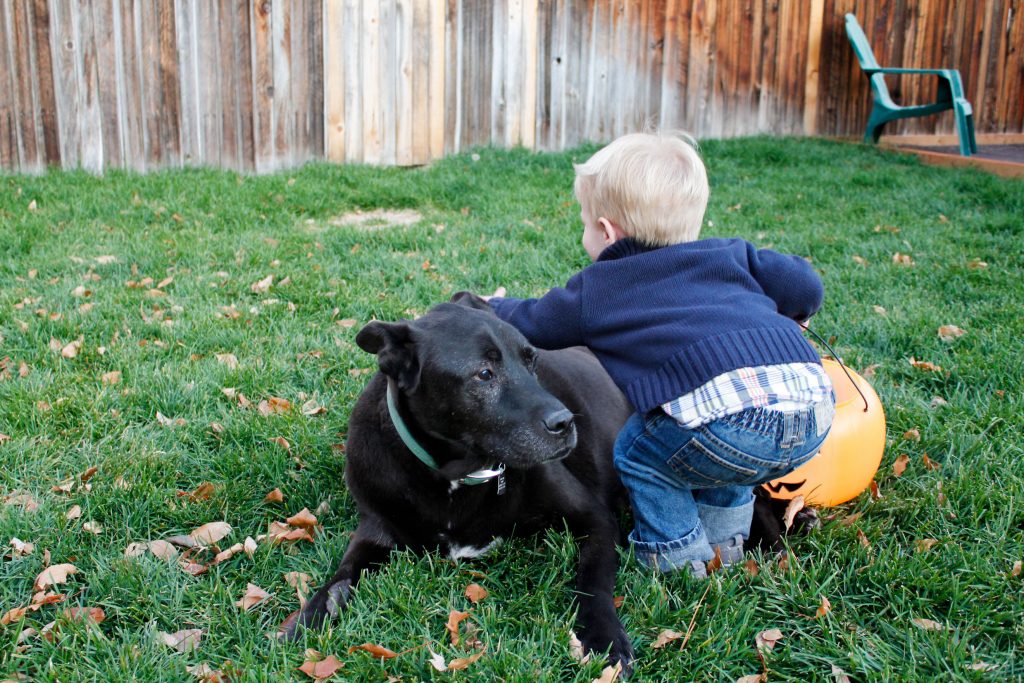 It’s October. Cold is coming on again. Sean toddles over to Jake and reaches across his back.

The little man looks down at this great black creature. This pillar. This noble hound. Then he bends down and pats his neck.

Days in the Sun

2013 has been a battle. The good days start to get buried under not-so-great days. He is, above all things, tired. I start to wonder if “The Old Man” will see his birthday. I try to get used to the idea he won’t.

He does. He greets me at the door that day, smiling.

Probably the last day he moved anywhere without one of us watching, ready to jump in and catch him.

There’s a point where you make a hard decision. When you realize there will be no sudden systemic failure, no heart disease, no cancer; nothing but an unrelenting, exhausting, life-sapping fade that pushes out every memory either of you ever had of better times.

When you realize he’s ready, and you aren’t.

Yesterday, the whole family spent the evening outside. Jake was happy and smiling the whole time. Relaxed and content in the middle of his yard, accepting the hugs and pets and scratches and love that are his due. 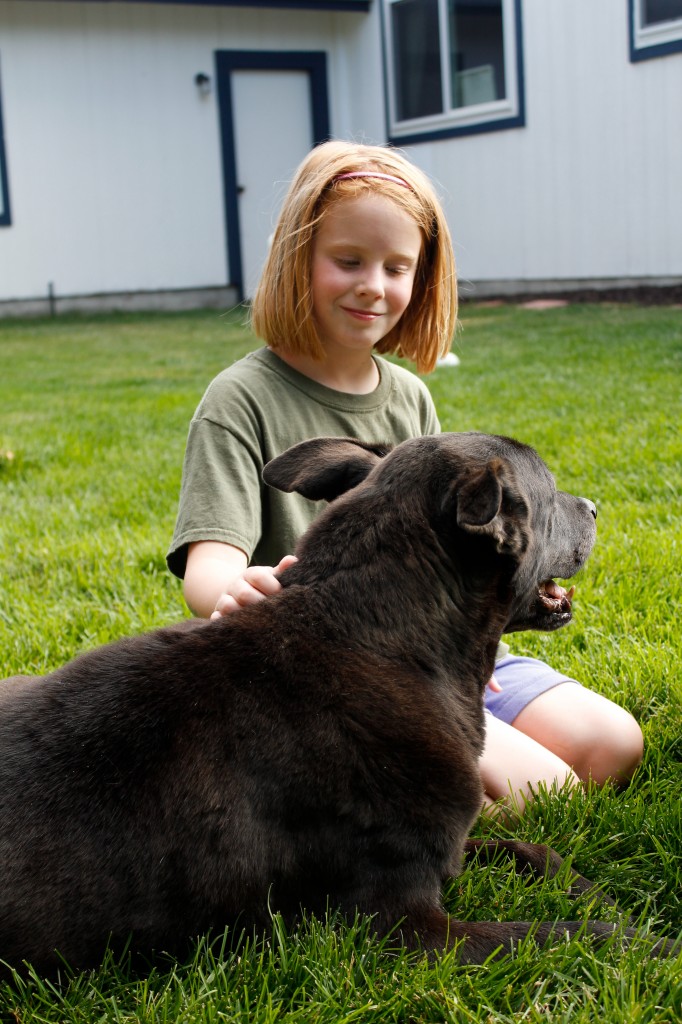 I made cheeseburgers. Toasted buns. Ketchup. Nothing fancy. Jake got one just for him, in his bowl, cut up, because I have always spoiled him as much as I thought I could get away with.

The whole thing wore us out a bit, but it was worth it. It was a good day.

Today, we called the vet, who came to the house personally. A little while later, Jake left. Then he left with them.

They live so fast because they love so much, I think. Nothing can sustain that forever.

But god how he tried.

I’m Going to Tell You About a Life

The life, of course, is mine.

Shaped in every facet by this dog. This best of all possible friends.

There’s too much in my life – too much love – for everything to fall apart with Jake gone. I think he made sure of that – that the family (and I) would be taken care of – before he lay down.

But it hurts, this life of mine.

“Tell me a story about him,” Kaylee says, tucked in at bed time. “Something funny. It will make you feel better.”

So I tell her about the table leg at Halloween. I tell her about the day Jake figured out the deal with “catch” — that I was always going to throw the ball away again, like an idiot — and took the ball, dropped it on the ground, and laid down on top of it as if to say. “We’re done with this nonsense, Dad.”

Kaylee and I laugh a little. We hug. 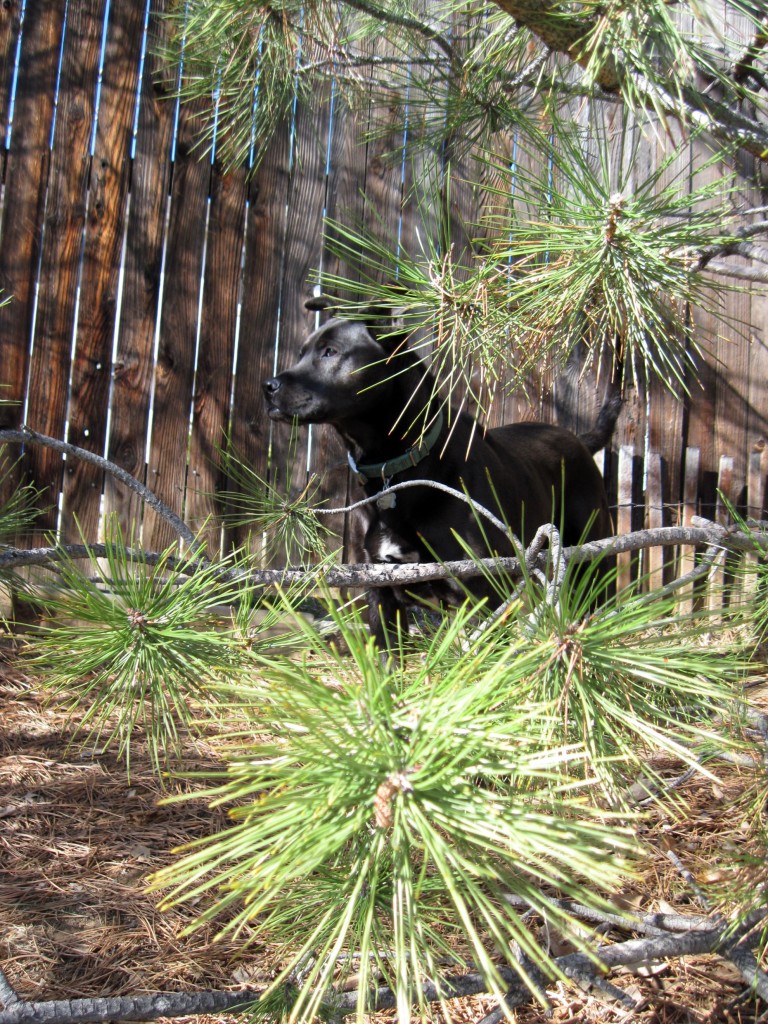