For those of you living under a rock, Chuck Wendig (one of the hardest working writers I know) has a new book coming out today: Mockingbird, sequel to Blackbirds, which I reviewed here not so very long ago, because I’m a bit slow on the uptake.

But THIS time, I actually got in with the cool kids and finagled a sit-down with Chuck to talk about his work in advance, so I could could share it with you guys in a vaguely timely fashion.

First off, the most important question: Explain the disgust and/or horror you feel when faced with Goodnight, Moon. I’m genuinely curious, because I’ve read it to my kids so many times I have it memorized like a 1st level Basic DnD Sleep spell.

It’s like a David Lynch bedtime story. It’s kind of eerily one-note with the primary colors mixed with the black-and-white, and the bunny has empty eyes and the old lady bunny has empty eyes and there’s a moon outside and a moon on the wall and creepy bears and then there’s, like, a bowl full of gruel? And then we’re saying goodnight to it? And goodnight to nothing? And goodnight to the spooky old bunny broad who keeps whispering for us to shut up? Man. It gives me this eerie Eraserhead vibe every time.

So what’s Blackbirds: Horror story? Urban fantasy? Science Fiction? Paranormal road trip? No one seems to know where it fits, and probably that’s a good thing, but how did you think of it in terms of genre when you were writing it? Was there a point where you just said, a la Miriam Black, “fuck it; it is what it is.”

I never knew. Even when I was writing the query letter, I thought, “I don’t know what to call this.” Which is against all the advice they give you, right? It needs to fit in a nice box, a thin slot, it needs to have a clear label in legible handwriting stuck over the whole thing.

Now, when I look at it, I think of it as “horror.” It’s labeled and shelved as “urban fantasy,” but to me, it’s horror. Though, I saw someone call it “noirror,” which I like.

You grew up in the eastern U.S. and live, as you put it, in Pennsyltucky, all of which I can’t help but notice is the basic geographical stomping grounds for Blackbirds. Many of the locations in the book gave me the sense I could probably look the names up and drive there, especially the [spoiler] with the [spoiler] near the end. Are there any locations from the book that you visited and said “Oh, yeah, this needs to go into a story,” even before Blackbirds made it onto paper?

Yeah, Blackbirds hops around a bit — mostly between North Carolina and Pennsylvania, not coincidentally both places I’ve lived. For me it wasn’t so much about traveling to locations and having them scream to be included, it was more that, during the writing, my brain wandered to these places, like they’d been pinpointed on a secret map that was then rolled up and tucked away into one of my skull-cave’s many cubbyholes.

These were, for lack of a better term, “Miriam places.” 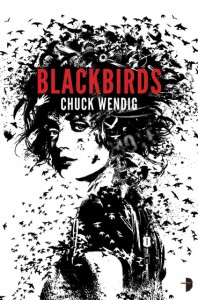 I feel bad for Miriam, because she gets hammered with death — all around her, all the time — it makes her a very vivid character (and sympathetic, despite not always being totally likable). As a writer, how did you come to find out about Miriam? Did you start at her origin story (for lack of better term), or with “this woman knows how anyone she touches is going to die” and work backward from there, or something else?

I started with the power, but not just that — it was about the shame and guilt and tragedy of that power. And all that ties into our own relationship with death which is that it remains ineluctable and uncontrollable. In a twisted sense, many of my characters are (often inadvertently) power fantasies: Miriam’s is tragic and horrible and soaked in blood but — but! — just the same, she finds that she has a way, however distant, however terrible, to control fate. A power that none of us really have, not in terms of staying the Reaper’s scythe.

There’s a couple scenes in Blackbirds that make me tell people “You should read this book! Except maybe skip this part…” Without tossing in too many spoilers, where there any bits in there that creeped you out when you were in the middle of them, or are you the black-hearted, soulless machine that everyone seems to suspect?

The gory bits don’t bother me. Not in a deep and emotional way — I’m sure, I squick out and shift in my seat as I think of a particularly wretched scene. For me it’s about a deeper kind of horror. Like, there’s a scene where a little kid dies, and that got me then and, now that I have a kid, it gets me ten times as much. It’s such a sad and, I think, telling scene that it really gets me. I tried to tell the story and talk around it without getting into the gory details, but that almost made it worse — like, painting with shadow reveals a much more sinister picture since our imaginations are left to do the rest.

And the imagination of the audience is far worse than anything the writer could come up with. Because the audience puts into place their own most intimate fears. 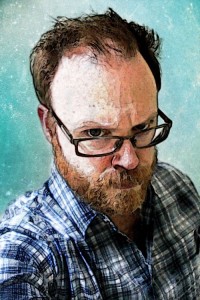 Your website, terribleminds.com, has justifiably become well-known as a good spot to get no-nonsense, no-bullshit writing advice, and you’ve published several books of writing advice in that same style. Many readers love them, some hate them, but what do you think of them? Were they harder or easier to write than fiction like Blackbirds or Irregular Creatures? Bonus Question: How often is your daily dose of writing advice inspired by a screw-up that you just made it through with your own work?

What do I think of them? I don’t really know. It’s me yelling at me, a lot of the time — as you note, it’s often a response of me coming up against my own shortcomings or exposing some vulnerability in my writing or the industry as a whole. It’s all personal, even when it doesn’t seem to be.

It’s not difficult to write; it all flows naturally. That said, it’s a bit of a time-sink to keep up the blog with the five-days-a-week schedule. I think it’s worth it, but some days, it’s hard to say.

The fiction is always harder to write, but ultimately, more satisfying.

Speaking of Blackbirds and Irregular Creatures, what’s your preference; if you could make the same living either way, would you rather write novels or short stories?

Novels. Hands-down, any day of the week. I love short stories, I do, but novels have oxygen and fat and room to move. I feel like the stories I want to tell fit into that form better than short stories. 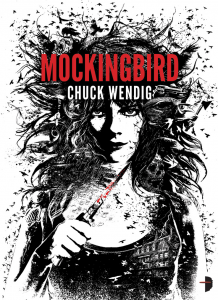 Mockingbird, the Blackbirds sequel, is coming out in a heartbeat or two today. Had you always seen Miriam as someone a series of stories could/would be built around, even before you got through Blackbirds, or did it become more obvious as you got to know her and see what there was to work with? Bonus round: do you see Miriam’s personal development in the second book progressing in parallel to the evolution of her power, or more of an inverse? Does great power come with a great shitty pile of stress, in the world of Blackbirds?

Miriam was like Schroedinger’s Cat for me in terms of a character — she was both alive and dead (as a series character) at the same time. If Blackbirds did well, hey, on she goes. If not, well, maybe she’ll just live inside my head. As such, Blackbirds works as a standalone novel but now, thankfully, doesn’t have to. And I’m at the point where I’ve got six or seven books in me at least — if a publisher wants ’em, I’m happy to have that relationship. If not, I’m just as happy writing them on my own and putting them out into the world.

As to the new book and Miriam’s development — it’s tricky, because you want to hit those bases, you want to grow her powers and deepen the mythology but not at the cost of character. For her, I think, as her powers grow, it’s key for Miriam to define and redefine her place in her own world and the world at large. We learned in the last book what she can do to sway fate, and this book is about whether or not she can fully embrace that role.

There’s a lot of family history with Miriam that still looms in the background by the end of Blackbirds. How much does that move towards center stage in the new book?

We see a little more of Miriam’s family — but I’ll go on record now as saying that her powers and her place are not some family legacy, not some secret supernatural bloodline. Trauma begets trauma and sometimes that trauma leaves some very clear — and in this case, very psychically active — fissures in one’s persona. Her family helped to make Miriam who she is as a character, but not as a psychic individual.

Just the same, family is a big thing for her — and will become doubly so in the third book, The Cormorant.

And that’s where I think we ought to leave it. You can check out Chuck at terribleminds.com, or on twitter.

Also, if you don’t already have it winging your way thanks to a preorder, MOCKINGBIRD is out today on Amazon, B&N, and Indiebound. Check it out!